I got Ph.D. in the University of Tsukuba in 2003. Today I will introduce you the School of Biotechnology, Jiangnan University, and then show a study report about a protein evolution platform based on CRISPR-Cas system.

Dr. Zhemin Zhou, Professor of School of Biotechnology, Jiangnan University in China. He got his Ph.D. in the University of Tsukuba in 2003, then worked as a JSPS special research fellow, JSPS foreign research fellow in the University of Tsukuba. He became a professor of Jiangnan University in 2009. His research fields are fermentation engineering and bio-catalysis, focusing on the enzyme structure analysis, evolution and application. His studies on nitrile hydratase, nitrile hydrolase, maleate cis-trans isomerase, natto kinase et al, have great promoted the industrial production of amides, amino acids and organic acids. He has published more than 200 papers, 2 textbooks, owned 50 patents of invention, presided more than 10 national scientific research projects. He is a member of Chinese Biochemical Society, and the Higher Teaching Steering Committee of the Ministry of Education. 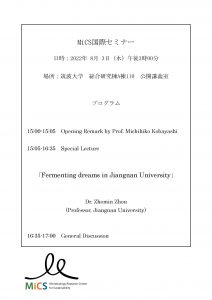